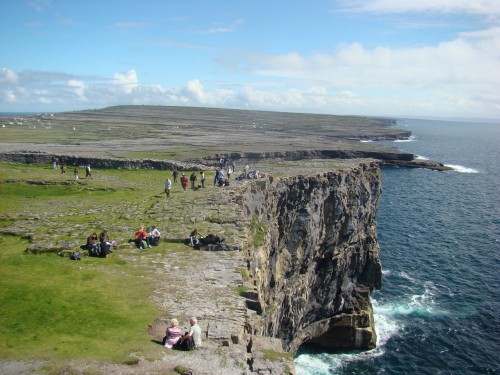 If you are interested in touring Ireland on your own, my Tour of Ireland is exactly what nature, history and culture lovers need. In this report you will find information and tips for planning your Tour of Ireland.

Dublin, the capital of Ireland and its largest city, was founded by the Vikings and until the 12th century was known as the Kingdom of Dublin. The majority of the city’s tourist attractions can be found in its very centre. These include an interesting castle, well-preserved and rich churches, impressive museums, and interesting architecture. Dublin is also a great place for entertainment and shopping. The city is located on the east coast of Ireland, at the mouth of the River Liffey. The capital is surrounded by low hills and arable fields. In the surrounding towns you can find many impressive monuments. Dublin's maritime climate makes the weather easy to predict, it rains a lot there.

The southern and south-eastern region of Ireland boasts not only the warmer weather, but also the outstanding tourist attractions. The region was shaped by very strong English influence, but also from the Vikings and the Normans. Some fortifications built there were designer to repel the French invasions. The region is extremely popular among Irish people and tourists due to its beautiful coastlines, unspoiled nature, peaceful villages, valuable historical monuments and its wonderful inhabitants. They cultivate many local crafts and traditions. In this part of Ireland there are many cultural events attracting audiences from all over Europe and the world.

Central Ireland is where Irish civilization and culture originated from. In central Ireland there are many monuments from the Celtic and Norman times, as well as several Gothic buildings. Hill of Tara used to be the capital and the seat of the rulers of the Celtic Kings of Ireland.  Northern Ireland is a relatively young area which is owned by Great Britain as of 1921, as a result of the division of the island. It consists of counties that the capital in Ulster.

What can you see during Tour of Ireland?

The number and quality of attractions / monuments in this region:

The above information is very important in planning travel itinerary, because it allows you to include as many the highest world class attractions as possible for 1 trip, especially in case, you have too few days available to travel..

Number of nearby regions to visit:
0

Sea / ocean in this region to swim in:
Cold ocean

What is included in the report?

How to plan your own trip during Tour of Ireland?

More details in the report or in my post "How to plan a trip itinerary abroad on your own ?" to be download on this website for free.

up
Shop is in view mode
View full version of the site
Sklep internetowy Shoper.pl